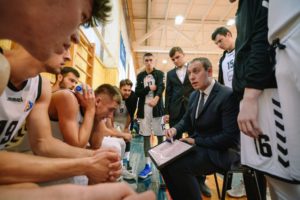 Another weekend of RKL Championship has passed: KTU team’s victory against LSU

The weekend results of KTU basketball team matches the performance of our National Team in the European Qualifiers. The university lost the game on Friday in the Regional Basketball League („TOPsport – RKL“) Championship. However, the second match was successful – they secured a victory.

Kaunas University of Technology team played both RKL competition games at home. However, KTU players had to admit the victory to “Olimpas” team on Friday (November 27) . The guest team defeated our University – 71:97. KTU player Bimba collected 13 points (22 EFF, 2 AS), but it was not enough to lead the team to the victory.

A guaranteed victory against LSU team

Saturday’s game (November 28) KTU basketball team left no hope for „LSU-Atletas“ team and won the game by a double digit differential 94:79. KTU team were leading most of the match, only the score of the last quarter remained tight. Laurynas Bimba, once again, was a leader of the game and scored 19 points (34 EFF), other player G. Asačiovas added 16 points, and 15 points – J. Talat-Kelpšas.

More about the games and full stats, check the official RKL Championship page.

Motivation: how to build and maintain it?

2 months ago
We are using cookies to provide statistics that help us give you the best experience of our site. You can find out more or switch them off if you prefer. However, by continuing to use the site without changing settings, you are agreeing to our use of cookies.
I agree